For integrations to Sage Accounting, Xero and QuickBooks Online you will see a setting within the AutoEntry Integrate page that will allow you to set an invoice date threshold for duplicate-checks.

For example, with a threshold of 5 days selected, and two invoices with amounts and invoice numbers that match exactly but dates that do not, duplicate-match will extend the AutoEntry invoice date FORWARD by the 5-day threshold, and suggest any resulting matches via the same 'Duplicate-check' message.

By default the date threshold has been set at 10 days - this option is editable via the drop-down menu shown below: 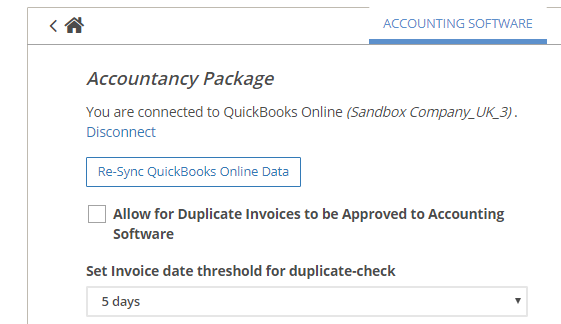 This threshold would be used in instances where...
a) an invoice is manually posted directly into the accounting software from a corresponding payment in the bank statement (rather than from the invoice itself), and then...
b) the actual invoice is subsequently published from AutoEntry into the accounting software (dated earlier than the bank payment)...
then extending the threshold will identify the manually-posted invoice (a) as a duplicate of the actual invoice (b).