Written by Brian Carolan
Updated over a week ago

There's two versions of the AutoEntry Sync App available depending on your local requirements. You can install it as either: 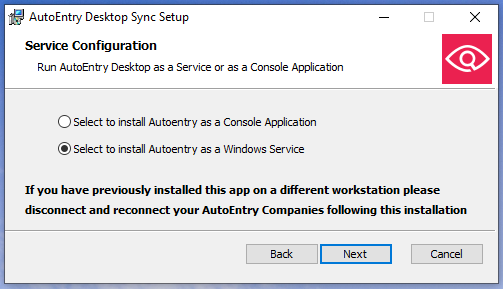 For the majority of users we would recommend installing it as a Windows Service. Once the Sync App has been logged into for the first time, the service will continue to run indefinitely on your PC, allowing AutoEntry to publish your invoice data into your accounts package (Sage 50 UK&I/Canada, QuickBooks Desktop) automatically without any further intervention.

As per the standard installation instructions (here), the Sync App should be installed in the same place as where the company accounts package files are stored i.e. either on your PC or on your server. If the Sync App’s Windows Service stops for any reason, a new ‘Re-Start Service’ button has been added to the Sync App itself, enabling you to re-start the service without having to open the Task Manager.

With the Console Application installation, the Sync App’s console window will run as a standalone application on your PC. The AutoEntry sync process will only run if both the Sync App and its console window are physically open and logged into. In practice, that means that to publish invoices from AutoEntry to your accounts package, you simply need to open the Sync App before working in AutoEntry, and then shut it down again once complete.

Below is an image of the Sync App Console Window running as the standalone application. This is to be kept running while using the Sync App and publishing from AutoEntry to your accounts package. 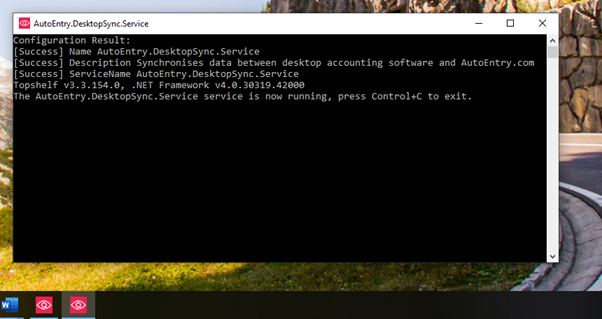 If you have installed the latest version of the Sync App as a Windows Service and now want to switch to the Console Application, you can do so by simply disabling the ‘Startup-Type’ under properties for the AutoEntry.DesktopSync.Service (in Task Manager) and re-starting the Sync App. 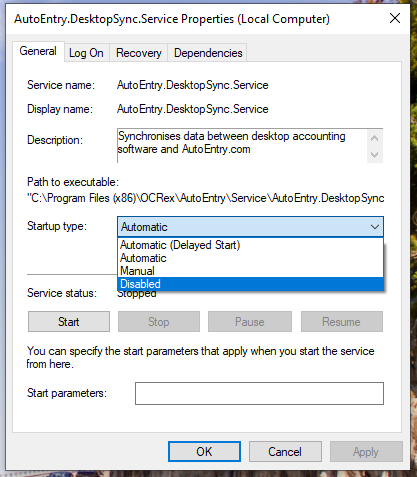 Note that if you’re running a previous version of the Sync App and now want to use the new Console Application, you need to do a full uninstall of the previous version and then reinstall using the new installer.